You should call it entropy, for two reasons. In the first place your uncertainty function has been used in statistical mechanics under that name, so it already has a name. In the second place, and more important, no one really knows what entropy really is, so in a debate you will always have the advantage.

— John von Neumann to Claude Shannon, as to what the latter should call his uncertainty function.

I recently read the classic article [1] by Jaynes, which elucidates the relationship between subjective and objective notions of entropy—that is, between the information-theoretic notion of entropy as a reflection of our ignorance, and the thermodynamic notion of entropy as a measure of the statistical microstates of a system. These two notions are formally identical, and can be written

is the probability of the

outcome/microstate. However, as Jaynes rightfully stresses, the fact that these concepts share the same mathematical form does not necessarily imply any relation between them. Nonetheless, a physicist cannot resist the intuitive sense that there must be some deeper relationship lurking beneath the surface. And indeed, Jaynes paper [1] makes it beautifully clear that in fact these distinct notions are referencing the same underlying concept—though I may differ from Jaynes in explaining precisely how the subjective/objective divide is crossed.

(As an aside, readers without a theoretical physics background may be confused by the fact that the thermodynamic entropy is typically written with a prefactor

, known as Boltzmann’s constant. This is merely a compensatory factor, to account for humans’ rather arbitrary decision to measure temperatures relative to the freezing point of water at atmospheric pressure. Being civilized people, we shall instead work in natural units, in which

As a prelude, let us first explain what entropy has to do with subjective uncertainty. That is, why is (1) a sensible/meaningful/well-defined measure of the information we have available? Enter Claude Shannon, whose landmark paper [2] proved, perhaps surprisingly, that (1) is in fact the unique, unambiguous quantification of the “amount of uncertainty” represented by a discrete probability distribution! Jaynes offers a more intuitive proof in his appendix A [1], which proceeds as follows. Suppose we have a variable

, which assumes any of the discrete values

. These could represent, e.g., particular outcomes or measurement values. To each

, we associated the corresponding probability

. The question is then whether one can find a function

which uniquely quantifies the amount of uncertainty represented by this probability distribution. Remarkably, Shannon showed [2] that this can indeed be done, provided

The first requirement simply ensures that

is well-defined. The second encodes the fact that if all events are equally likely, then the uncertainty increases monotonically with the number of events. The third property is referred to as the composition law by Jaynes, and is easily explained with the help of figure 6 in Shannon’s paper [2], which I’ve reproduced here: 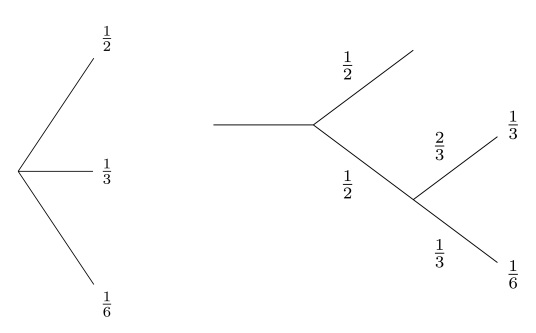 On the left, we have three probabilities

, so the uncertainty for this distribution is given by

. On the right, we’ve coarse-grained the system such that at the highest level (that is, the left-most branch), we have two equally likely outcomes, and hence uncertainty

. However, this represents a different state of knowledge than the original

, insofar as it disregards the fine-grained information in the lower branch. Obviously, our uncertainty function should not change simply because we’ve chosen to group certain clusters of events together. Thus in order for

to be invariant under this composition, we must have

prefactor is the probabilistic weight associated with this composition of events.

To generalize this, it is convenient to represent the probabilities as rational fractions,

, which results in the requirement

To see this, consider the example given by Jaynes, in which we take

outcomes are equally likely, then the uncertainty, given by the left-hand side of (4), is

. As in the previous example, we want this uncertainty to be preserved under coarse-graining, where in this case we group the possible outcomes into

, as illustrated in the figure below:

Thus we see that at the highest level, the uncertainty — had we thrown away the fine-grained information in each cluster — is

. The second term on the right-hand side of (4) is then the weighted value of

for each cluster, as in the simpler example above.

The final trick is to consider the case where all

, the solution to which is

is some constant (note that by the second condition,

). Substituting this into (4), we obtain

Thus, on the subjective side, we see that entropy (1) is the least biased representation of our state of knowledge. And this fact underlies a form of statistical inference known as maximum entropy or max-ent estimation. The basic problem is how to make inferences — that is, assign probabilities — based on incomplete information. Obviously, we want our decisions to be as unbiased as possible, and therefore we must use the probability distribution which has the maximum entropy subject to known constraints—in other words, the distribution which is maximally non-committal with respect to missing information. To use any other distribution is tantamount to imposing additional, arbitrary constraints, thereby biasing our decisions. In this sense, max-ent estimation may be regarded as a mathematization of rationality, insofar as it represents the absolute best (i.e., most rational) guess we could possibly make given the information at hand.

To make contact with the objective notion of entropy in thermodynamics, let’s examine the max-ent procedure in more detail. Suppose, as in the examples above, that we have a variable

. In a typical statistical inference problem, we don’t know what these probabilities are, but we know the expectation value of some function

Now the question is, based on this information, what is the expectation value of some other function

? As it stands, the problem is insoluble: we need to know

and (6) collectively provide only 2 constraints. Max-ent is the additional principle which not only makes this problem tractable, but ensures that our distribution will be as broad as possible (i.e., that we don’t concentrate our probability mass any more narrowly than the given information allows).

As the name suggest, the idea is to maximize the entropy (1) subject to the constraints (6) and (7). We therefore introduce the Lagrange multipliers

, and minimize the Lagrange function

then returns the two constraint equations, along with

We can then redefine

to absorb the 1, whereupon we obtain the more elegant result

To solve for the Lagrange multipliers, we simply substitute this into the contraints (7) and (6), respectively:

is the cumulant generating function (in QFT, this would be the generator of connected Feynman diagrams; see effective action),

corresponds to the thermodynamic energy, and (10) is none other than the Boltzmann distribution. Of course, this naturally extends to multiple functions

, which may generically depend on other parameters

; see [1] for details—Jaynes paper is a gem, and well-worth reading.

This essentially completes the connection with the thermodynamic concept of entropy. If only the average energy of the system is fixed, then the microstates will be described by the Boltzmann distribution (10). This is an objective fact about the system, reflecting the lack of any additional physical constraints. Thus the subjective and objective notions of entropy both reference the same underlying concept, namely, that the correct probability mass function is dispersed as widely as possible given the constraints on the system (or one’s knowledge thereof). Indeed, a priori, one may go so far as to define the thermodynamic entropy as the quantity which is maximized at thermal equilibrium (cf. the fundamental assumption of statistical mechanics).

Having said all that, one must exercise greater care in extending this analogy to continuous variables, and I’m frankly dubious as to how much of this intuition survives in the quantum mechanical case (I should mention that Jaynes has a follow-up paper [3] in which he extends these ideas to density matrices, but I confess I found it less compelling). And that’s not to mention quantum field theory, where the von Neumann entropy is notoriously divergent. Nonetheless, I suspect a similar unity is at play. The connection between statistical mechanics and Euclidean field theory is certainly well-known, though I still find thermal Green’s functions rather remarkable. Relative entropy is another example, insofar as it provides a well-defined link between von Neumann entropy and the modular hamiltonian, and the latter appears to encode certain thermodynamic properties of the vacuum state. This is particularly interesting in the context of holography (as an admittedly biased reference, see [4]), and is a topic to which I hope to return soon.